By Michael Scott after Bram Stoker

An eternal love story between Vampire and Human.”

Michael Scott’s new adaptation of Dracula brings the 21st Century to this classic Vampire story. True Blood, The Vampire Diaries and the Twilight series are based on Bram Stoker’s original creation, and this production explores the genesis of the original through this modern conception of Vampires.

A young and talented cast, led by :

This shocking and terrifying story once again brings into focus the battle between day and night, good and evil, life and death, interweaves an enduring story of impossible love – Dracula’s hunt for an eternal partner to share his darkness and the new dawn of the Modern World.

It is this sentiment, this core that has enabled Twilight and True Blood to exist. The Tivoli Theatre invites you to come and see the original.

“Do  you know what it is to be alone?

To go through centuries

as if turning the pages of a book

to search through time’s shifting memories

who could love you back.” 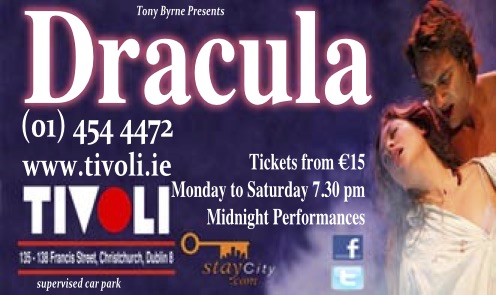