Written and Devised by Michael McCaffery

After Mr Gilbert and Mr Sullivan

A sparkling evening, bubbling with wit and good humour, Innocent Merriment! promises a five-star evening destined to leave everyone with feelings of pleasure.

Devised and Directed by Michael McCaffery 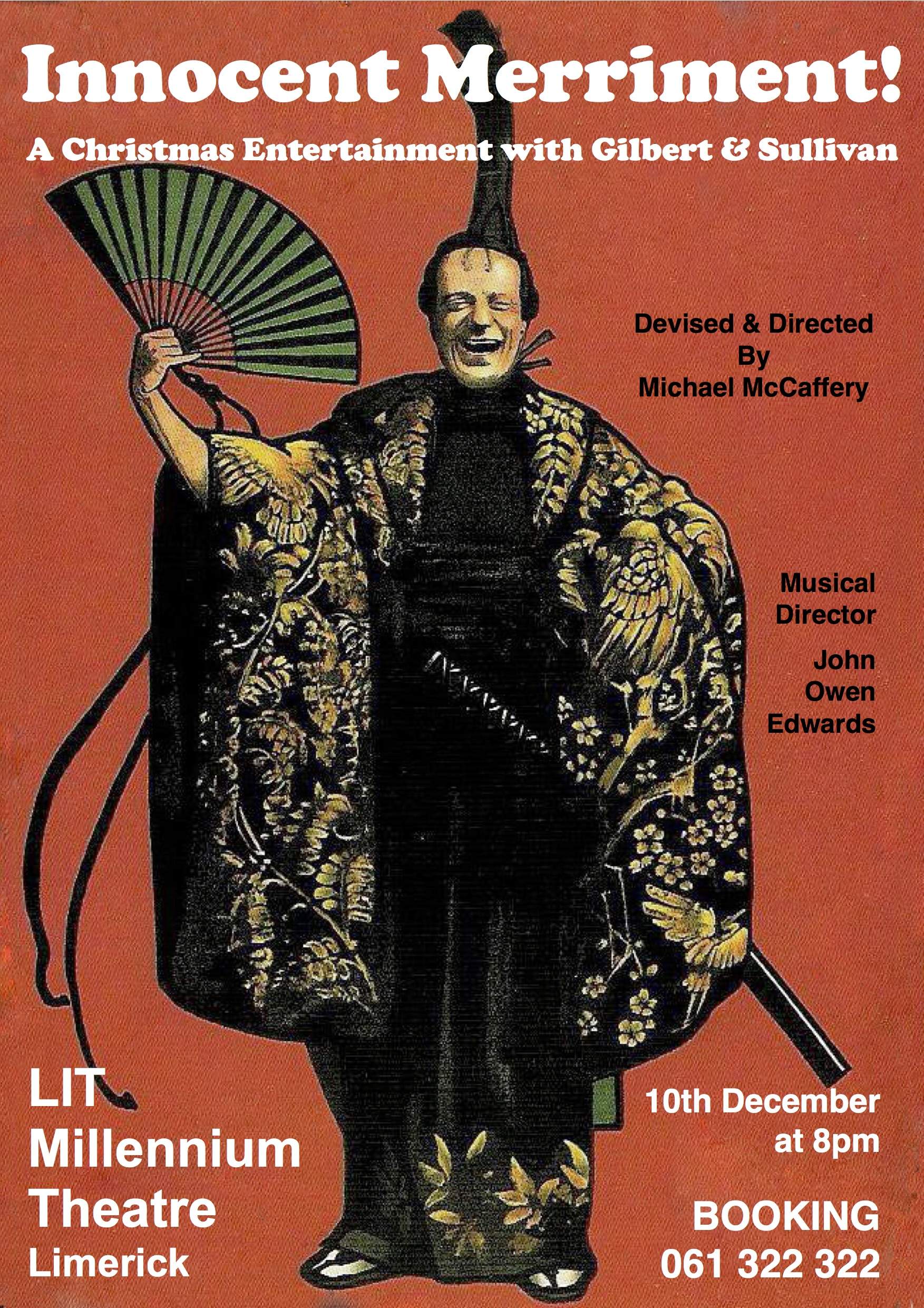 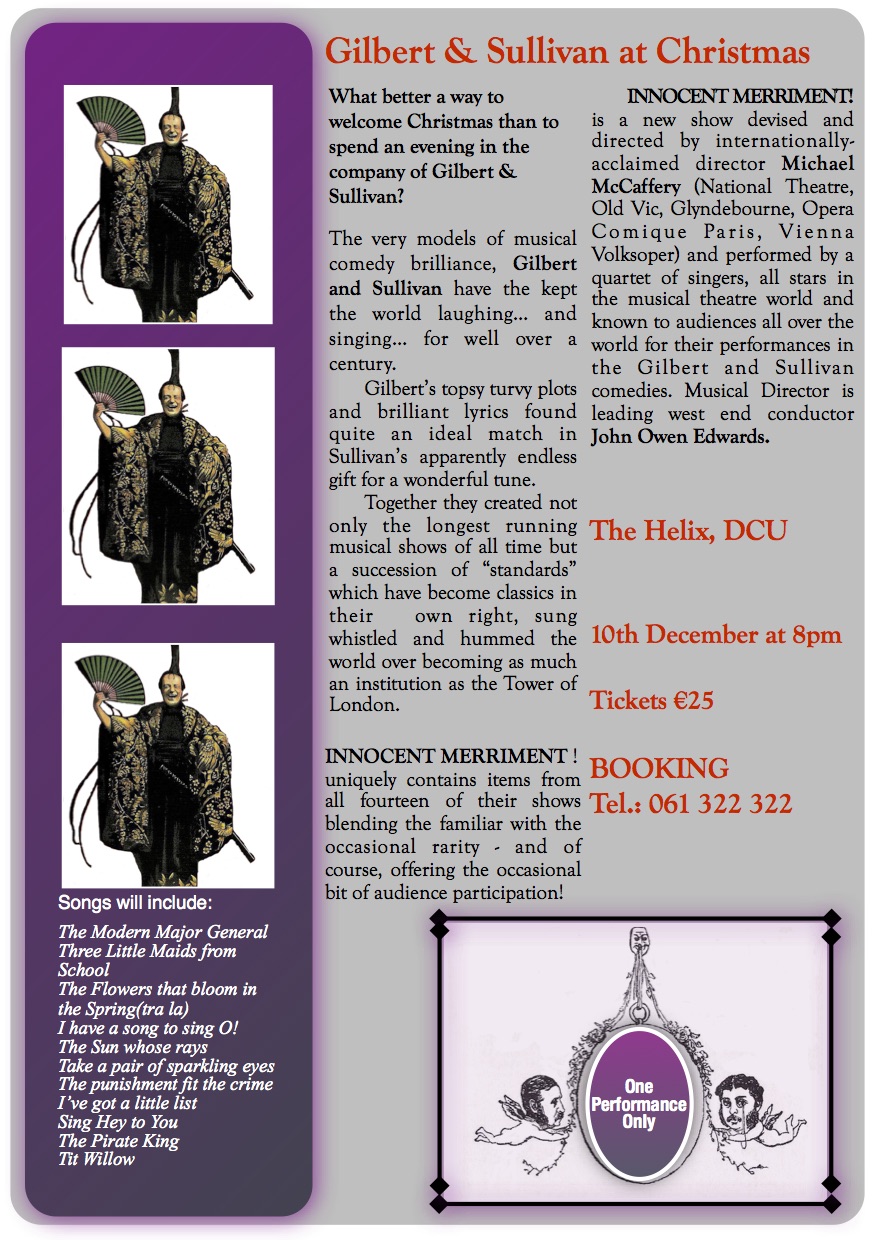 The very models of musical comedy, Gilbert(words) and Sullivan (music) created some of the most popular - and ground breaking -  entertainments to come out of a century filled with  musical and comedy delights. Often tempestuous, their twenty five year collaboration gave the world some of the most enduring and delightful musical shows of all time, entertainmenst which defy their age with their continued ability to delight, charm, touch and exhilirate audiences wherever they are played.

A hundred and twenty years on, production companies still compete to produce these sure-fire hits, so that it’s reckoned that, everyday, somewhere in the world, one of the Savoy Operas is being played to a capacity house who revel in it now as much as did their great-great-great granpdparents.Played straight or with a twist, done as opera or “Broadway” it seems that time cannot wither them nor custom stale their infinite capacity as a source of innocent merriment.

The Gilbert and Sullivan songbook features some of the best-loved – and best known  theatre songs ever written and Innocent Merriment! packs an astonishing fifty of them into the two-hour show.

The Very Model of a Modern Major General,

The Sun whose Rays,

Take a Pair of Sparkling Eyes

The Captain of the Pinafore

The Punishment fit the Crime

... are just a few of the many favourites on offer in this sparkling new show devised and directed by internationally re-knowned director Michael McCaffery.

Soprano Charlotte Page is one of today’s leading musical theatre sopranos. Equally at home in opera, operetta and musicals, Charlotte’s many roles include three seasons as Carlotta in The Phantom of the Opera at Her Majesty’s Theatre in London, Cunegonde in The Opera Group’s Candide and Valencienne in Opera Holland Park’s Merry Widow. Charlotte has also appeared for major UK and European opera houses. For the D’Oyly Carte she has played Phyllis and Yum Yum, both at the Savoy and has been seen in all the soprano leads for the Carl Rosa Company in the UK, Ireland, US and Australia. She will star in Carl Rosa’s forthcoming London season of Savoy Operas in February 2008.

Janet has appeared with all the major UK opera companies and with the Carl Rosa Company in mezzo and contralto roles. She has also appeared in repertory, the West End and in a wide range of contemporary music, touring for the past three seasons with Opus One Opera. A writer and director, she has also created her own one woman show, based on the life of Savoyard Jessie Bond, which has been televised.

Oliver White works in a variety of fields, ranging from oratorio to musical comedy. An accomplished actor, he has also appeared in a range of dramatic roles. His concert work includes acclaimed BBC Proms appearances with Yan Pascal Tortellier and numerous festival engagements with distinguished artists including  Richard Hickox, John Dankworth and Dame Cleo Laine. A regular G&S performer, he made his West End debut as Fairfax in D’Oyly Carte’s Yeomen of the Guard and he has now played eleven major roles in the Savoy Operas for prestigious companies such as Opera della Luna, D’Oyly Carte and the Carl Rosa Company. In 2008, he will appear with Armonico Consort in The Mariage of Figaro and The Magic Flute and will premiere a new musical which he is presently writing.

Bruce is now recognised as one of the leading exponents of Gilbert and Sullivan today with a repertoire including all the baritone and bass-baritone roles. A member of the old D’Oyly Carte Company, he is a regular with the Carl Rosa Company and has appeared with them in every season in roles including the Mikado, Sergeant Merryll and Mountararat. In the West End, he has appeared in Stephen Sondheim’s Follies and for an extended run as Old Deutoronomy in Cats. With a busy concert diary, Bruce sings regularly in oratorio and recitals. He will star in the Carl Rosa West End season of Gilbert and Sullivan in Spring 2008.

One of the most celebrated conductors and musical directors in contemporary musical theatre, John Owen Edwards has been responsible for some of the outstanding new productions and revivals –in the West End and on Broadway—in the last thirty years. Shows include A Chorus Line, Jesus Christ Superstar, Aspects of Love and Phantom of the Opera, Carousel and Oklahoma. His recording catalogue also includes more than forty major shows, many recorded for the first time in their original format. The musical director of the D’Oyly Carte Company for more than a decade, John also leads the Gilbert and Sullivan Company at Buxton’s International G&S Festival and appears regularly in concert and cabaret. Highlights in the coming season include a new production of Phantom of the Opera for the Opera House in Graz, Austria